Milly and The Devil’s Beeftub

Group ride ambassadors Iliyas Campbell and Paul Crossan from 56 North motorcycle magazine headed out for a scenic ride along The Devil's Beeftub in the Scottish Borders, the latest route to be showcased in our Breathtaking Roads series.

Equipped with GoPro cameras – and joined by everyone’s favourite four-legged biker, Motorbike Milly – Iliyas and Paul captured some truly stunning footage from their ride, while highlighting key considerations for safe group riding, including riding at your own pace, anticipating other road users, looking both ways in junction (as demonstrated by Milly!) and taking regular breaks.

“Most of my riding is further north but the area around the Devil’s Beeftub gives me the opportunity to ride in a very different environment. The whole look of the Borders is different and that alone is refreshing.

“Riding as a group is simplest when you ride as if you are on your own. What I mean by that is, follow the same rules of the road and take the same safety measures as you would if you were alone, but add into that the need to be aware of the rider in front and any rider behind you – in case they drop back.

“You also need to remember that you don’t own the road, just because there’s a group of you riding. Other traffic may want to pass, so let them do so safely. We can all get a bit frustrated when being held up by other traffic and there are plenty of road warning signs cautioning against frustration. Don’t become a cause or a victim of road frustrations.

“Scotland has some of the most incredible riding anywhere in the world. I’ve ridden numerous continents and since moving back to Scotland I can honestly say it is the best place for riding.

“It’s true we may not have what some would consider the best of weather, but when the suns shines Scotland is a stunning place to ride. When it rains the landscape has a rugged hard feel to it that sets a whole new scene – and with a bit of snow it can be absolutely breathtaking.

“We also have incredible and varied scenery – from mountains and hills to bright white beaches and turquoise waters in the Hebrides – as well as great people, and an amazing depth of history.” 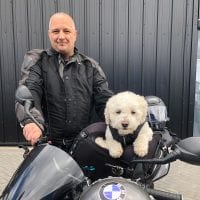